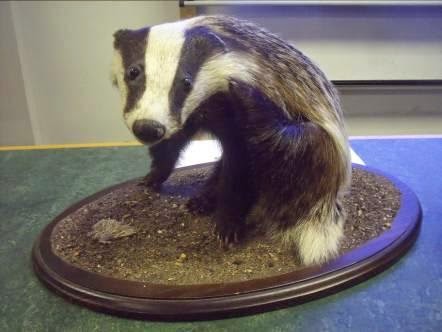 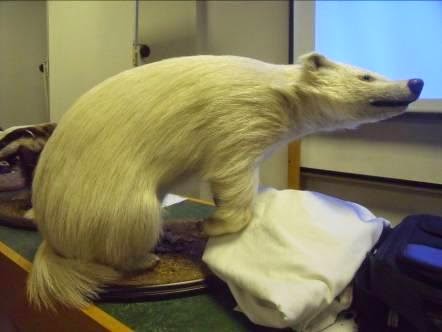 Opening the evening with a display of exhibits, John introduced our largest carnivore with some examples of road casualties, now stuffed and mounted for display, including a handsome albino. Death on the road is a big problem, he said – 50,000 are killed each year. They have defined routes and will repeatedly cross roads at the same crossing points. Their sense of smell is paramount, like that of a bloodhound – and though they have excellent hearing and good eyesight, they have little awareness of the dangers of the car. John then turned to his presentation. 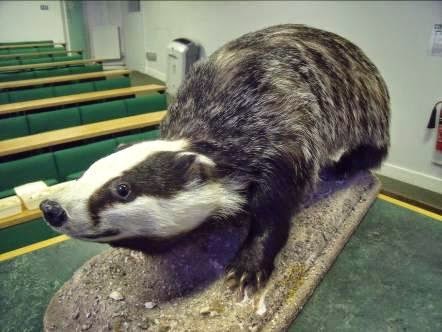 He started with pictures of the Group’s sett in Binfield. At that date, despite the protection afforded badgers under the Wildlife & Countryside Act, their setts were not covered. Setts would be destroyed by pouring diesel and blocking them with soaked rags. At Binfield a group was convened by a local lady, Shirley Davis, who organised a campaign to save the long-established sett. The developer eventually fenced off the site, erecting a close-boarded fence around it. The site is only half a hectare, which is insufficient for a colony to survive, so gates were fitted allowing access to a nearby wood. As installed they were too narrow, and John showed a photograph of a circular yellow stain around the opening where the creatures had had to force their way through, the sandy earth in their coats acting as paint in a living paint brush. The gates have since been widened, and the site doubled with the acquisition of additional land from a neighbouring garden.

The site includes a tool shed for a lawn mower – as badgers prefer the shorter grass of grazing land – and a hide. John admitted (or boasted?) to have spent over 3000 hours watching badgers. The colony has also been filmed for television by Simon King.


John then turned to describing the ecology of badgers in general, starting with the typical disposition of setts within a territory. Setts will have multiple entrances and be indicated by spoil heaps of sandy earth, chalk or clay. Badgers can dig out a burrow in a night or two. John displayed a 4kg flint which a badger had removed when digging. Tunnels may extend down 3 metres, opening into a nest chamber and on to the next. Ventilation shafts will rise straight up, just breaking the surface. Ideally these will be sited on a bank to achieve a chimney effect. Indeed in frosty weather the badgers’ breath can be seen rising into the air, betraying which chambers are occupied. Old holes are large (large enough for John to enter) and worn sooth from the badger’s preference for entering the burrow backwards when dragging nesting material into the sett. 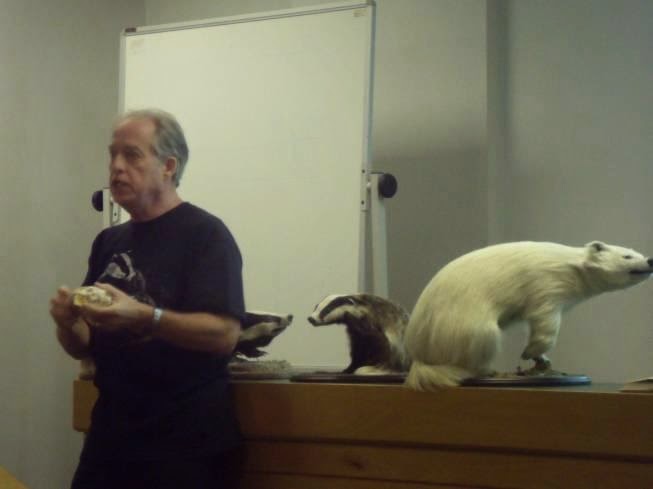 Badgers sometimes share their sett with foxes. There are about 100 holes at Binfield, but only about eight are used at a time, so occasionally foxes occupy vacant holes on and, if not exactly welcomed, are at least tolerated. But only if are quiet, however, otherwise even cubs will chase the foxes away. (Foxes will sometimes reciprocate, but frightening the badgers from behind and causing them to run and hide.)

Artificial setts are sometimes used. John illustrated this with a picture of a concrete drainage pipe, in a roadside ditch, which was occupied for three months. Others are deliberately placed as part of developers’ mitigation measures, such as when Legoland was built near Windsor, or currently in Wokingham where a footpath has had to be closed.


One sign of badger occupation is the presence of clumps of hair on barbed wire fences. They will be white with a dark band towards the white tip. They are oval in cross section, so will click when rolled between finger and thumb, and under a microscope it will seen that they are hollow. Another sign is abandoned balls of bedding material, usually grass or hay, but sometimes ivy or bluebell leaves.


Badgers have favourite scratching posts. They drag their forepaws down the tree, especially in damp weather when the wood is more receptive to the application of sent. This they achieve by shuffling backwards and raising their rears up the trunk above them, lifting their tales to secrete their scent. Badgers are very territorial and this is a way of marking their patch.

Paw prints are another sign. These are distinctive, though not easy to spot. Badgers have five, one-inch long, non-retractable claws, and therefore five pads. These are forward facing, in parallel, with a kidney-shaped palm behind, which is about 4.5 to 5 cm across. The rear paws are much less defined, and often obliterate the forepaw prints as the animal moves forward. John showed a marvellous picture of brown prints on a white background. Here leaves had fallen into a pond and an oily residue had built up on the water’s surface. When the pond froze over the oil lay on top of the ice and allowed clear impressions to be left in the snow when the badgers walked over it. Badger paths, while not distinctive, remain in use regardless of the weather, even in snow, and so provide an easily seen feature of their territory.


Another sign is damage to lawns, usually those with weeds among the grass which harbour the insects that badgers rely on for food: cranefly larvae and summer chafer grubs. During the night then, they will grub around, earning their old vernacular name “earth pig”.

Badgers preferred food source is the lobworm, humbicus terrestris, of which they may eat between 100 and 200 a night. However, worms like warm and wet conditions so the badger has to have other sources to supplement its supply. This is especially true in the autumn, when they will put on as much as 3kg to see them through the winter. They will eat slugs (wiping them on the grass first, to remove the slime) and snails (crunching the shells). They will break open dead wood for larvae and insect eggs. They like brambles, elderberries (off the ground) and hard fruit (they will climb trees for apples and pears). Pausing for an anecdote, John referred to two badgers were found dead in a pond in West Surrey. On investigation it appeared they had eaten freely of apples in a nearby orchard; these had fermented and the badgers had become intoxicated with fatal consequences. Badgers will break into wasps’ nests and eat the larvae from the honeycomb. They do get stung, however, and are not immune, so will eat quickly and run. They enjoy eggs and will carry them back to the vicinity of the sett to eat in safety.


Badgers are very fussy about hygiene. They dig latrines on the edge of their territory that all the family use, creating another alongside when the first is full. Their gelatinous, mash-like excrement is distinctive in appearance and smell. To establish occupancy and measure their territory it is a surveying practice to introduce coloured pellets into the badgers’ food, so the evidence will turn up in the peripheral latrines. An annotated photograph illustrated the contiguous territories of six neighbouring setts. Occasionally nature supplies a similar effect, as illustrated by a photograph of a latrine containing rose-hip tinted ordure!


Protection against road traffic is possible, though expensive. 2-metre tall, heavy-duty, chain link fencing can be installed, burying the lower part in a curve away from the road to deter any badgers from digging. A break in the fence is permitted where there is a tunnel for their use. On the M5 near Exeter there is even a tunnel slung below a bridge over the motorway; it is used regularly and not just by badgers, but by deer and hedgehogs too. Railways too are deadly obstructions. On a line near Tonbridge, in Kent, 100 badgers were killed in three months. Yet the third rail on an electrified line need not be continuous, so provision for badger crossings can be made if planned.


In April or May badger watchers play ‘spot the nipple’ as lactation is often the first sign of new cubs. Badgers undergo delayed implantation. The sow might mate, but the fertilised egg ‘sleeps’ until the time is propitious. She may gather three to six in a year, and then, if undisturbed, enter a two-month gestation in December (though delay can last up to 18 months.) The cubs are born in February, but not seen above ground for about eight weeks. Two or three cubs per sow is normal, but sometimes as many as four or five. At birth they are only 12cm long, blind, with ears closed and weighing only 100g. When they do make an appearance on the surface, it is usually to feed, as badgers don’t take food underground. (They will take toys, however, as suggested by the 150 golf balls in one sett near the local links; tennis balls get shredded.) Their heads are fully grown by August, but their bodies still smaller – 4kg, say, compared with an adult of 10 – 12 kg. (The heaviest John has encountered was a whopping 16kg.). Sexing is difficult without inspection, but John showed photographs of the essentials. The male has an extra bone, which traditionally gamekeepers used as a toggle on their jackets!

Drawing to an end John illustrated a number of injured and disorientated creatures that the Binfield Group has helped over the years, including one from Finchampstead that was taken to the animal hospital in Somerset run by Pauline Kidner. Pauline tends to 50 to 70 cubs per annum, building up small groups of healthy animals (with minimal human intervention), for release back to the wild. Releases have to be carefully managed: the cubs have to have two tests for bovine TB and are chipped and tattooed. A release officer locates suitable sites – and not in cull areas!

To conclude, John set out a family tree of the Binfield badgers, noting visiting badgers and known deaths, and identifying al the cubs born at the sett. The tree was based on sightings over 25 years, from 8 June 1990 onwards, the number of badgers varying from three in 1999, down to one at times, to six in 2013.

No, quite the opposite. They are easily driven away be development. Badgers are easily frightened by sounds and running is their defence. Otherwise they remain very settled in their rural locations. The sett at Binfield has been in occupation for at least 145 years.


Do they eat hedgehogs?

Yes, occasionally. Sometimes you can hear the hedgehogs scream. The badger will leave the spiney skin, which, as it dries, shrinks and inverts into a ball.

In a hotspot only 1 in 7 is likely to have TB, so much of the culling is unproductive.

What is the extent of the national population: numbers and distribution?

How big is a typical territory?

10 hectares constitute a normal sized territory for a female with cubs – and a football pitch is about 1.5 hectares – but it does depend on food sources. There have been some at 100 hectares, but generally badgers don’t like to go too far.

What is their average age?

3 years (because of high mortality on the roads). They seldom live long enough to become dominant. They can live to be 12 or 14, lifespan being limited by wear to their teeth (as worms are full of grit). Adults have 38 teeth on average, though individuals do vary.

There are 60 groups under the auspices of the Badger Trust, with at least one in each county. Ernest Neal is the authoritative author on the subject.
Posted by Webmaster BMG at 10:44