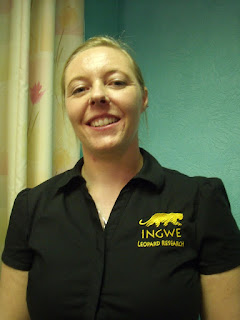 Tara explained that she had spent ten years in South Africa, as a guide for the first seven and then embarking on a PhD toward the latter end of her time there, while working at Ingwe Leopard Research. (‘Ingwe’ means ‘Leopard’ in the local language.)

Like other animals leopards are threatened by habitat loss, food depletion and conflict with humans, and Tara made the case for their conservation, and that of similar predator species. One argument is ecological – often the loss of an apex predator will cause a trophic cascade in the food chain, or a meso-predator release. Another is economic – leopards are highly charismatic animals and the tourism they support is economically beneficial to host societies.

Threats to leopards
Most important is conflict with farmers, though livestock deaths are not always caused by leopards: disease, accidents, etc can create an exaggerated impression. Even the presence of its spoor does not necessarily mean the leopard killed the livestock. (If the wound is not obvious it is possible to lift the skin to see where bruising occurs: leopards go for the throat.) Other human-related threats include:
Tara cited the instance of a road with tall grass growing on either side, on which four leopards had been killed a year; this was one of the triggers for Will Fox to set up Ingwe Leopard Research. When he arranged to have the grass cut there were no known deaths in the following three years.

Ingwe Leopard Research in Mpumalanga Province was set up in 2011 with a triple purpose: research to support conservation with evidence; raising awareness, and supporting sustainable tourism.

Research
Although Tara is back in the UK, the research work is ongoing, supported by the income from running safaris. Government sites offer legal protection, but contain only 25% of the leopard habitat in South Africa; up to 75% falls outside formally protected areas and leaopards are known to roam freely. Permits to kill leopards cost R10,000 (£500) and are relatively affordable. Ingwe undertakes the only leopard research in the province outside Kruger National Park, generating data to formulate informed decisions. It also gathers data on other carnivores such as genets and hyenas.

Raising awareness
One of the fundamental tasks is to encourage an interest in conservation among the local people, and an attitude where leopards are valued rather than perceived as a threat. Tara described a two-pronged approach:

School visits
Ingwe helped with fund-raising, offering lessons in computing, repairs to building etc. After some months of involvement in the school Tara finally discussed the purpose of Ingwe’s work with the headmaster, but only once he had raised the subject. It transpired the locals were concerned about the presence of leopards as a threat, much as with the lethal snakes that abound in Africa. Gradually Tara encouraged them take a more positive view.

Work with farmers
Influencing farmers was difficult to start with, but by listening to them in the pub – rather than preaching at them – and indicating she understood their wish simply to earn a living, she was given a month’s trial with one of the more prominent locals to demonstrate the leopards were not an active threat. The trial was successful and the leopards remained untouched thereafter! All permits have subsequently been rescinded.

In describing the characteristics of leopards Tara quipped they often “hadn’t read the script”. Received wisdom suggests they are:

Highly adaptable.
They are known to eat as many as 92 prey species ranging up in size to eland calves and juvenile giraffes, and one has even taken on a 3m crocodile. They can carry their own body weight up into a tree. But the optimum size is the 25kg impala. Surprisingly, they will also eat fish.

Solitary
Not always. Though males usually are, mothers spend 90% of their time with cubs. However, Tara has also seen males spending time with their offspring (sons) up to three years old, even from different litters. Such behaviour has also been reported in the lower density populations of Namibia, so is not unique to Ingwe.

Territorial
Both males and females have their own, often overlapping, territories. Acquaintances are more likely to be accommodating, and submissive individuals will tolerate incursions. ‘Territory’ is not absolute: more of a ‘core area’, one that will be defended. They defecate in prominent places as a visual sign of their residence, and will claw trees, scent mark (their odour smells of popcorn) and call. The sound of the leopard call is like that of a saw, usually four repetitions for a female; as many as ten for a male.

Nocturnal
Not always. Though adult males seldom appear, females can be seen in the heat of the day, and are more likely to come out on overcast days or in winter.

Savannah dwellers
But they also live in rocky environments and they are the most widespread of the felines: from Cape Town to the Amur Valley in Siberia and down to Indonesia. The leopard is the last of the ‘Big five/ to remain free-roaming.

They were classed ‘near threatened’ in 2008, but are so elusive there are no accurate records. One estimate of 600,000 in South Africa has been dismissed as absurd. But there are 150 CITES in South Africa every year, and seven in the province. See Swanepoel 2013 for distribution of suitable habitat based on knowns populations both in the Transvaal provinces and the Cape.

Spoor/tracks
Tara trained volunteers to locate and identify leopard tracks. They have a three-lobe pad and four oval toes with no claw marks. Left and right are distinguishable. Trackers were to take photographs with a ruler included for scale (see page 4), but there was considerable difference in determining accurate measurements – typically the margin of error is between 1-2 cm.

Camera traps
Tara established a camera club to fund camera traps in return for access to the best photographs, and somewhat against expectation this was highly successful. As many as 50 cameras were obtained over a three-year period. They were placed 45cm above the ground, 2.5 km apart (the smallest leopard range is 3.2km), and were distributed accorded to biome: grassland (30%) or savannah (70%). Several of the traps were productive in generating evidence of leopards. However, other creatures were photographed too: samango monkey (a forest dweller), Cape fox (on the edge of his distribution), and several others. Interestingly the trackers found evidence of these creatures long before the cameras, the presence of leopards being the only exception!

ID Kits or ‘Spot the Difference’
Each animal has individual markings that can be checked against the ID guide, comparing say three or four areas of the pelt: neck, leg, flank, etc. Many leopards have a ‘necklace’. Often it is only the leg that is in sufficient focus in photographs, momentarily static when passing a camera trap.

Sex
Size or build is not always a reliable guide. The leopard known as Long Legs was large and muscular, and it was only later she was identified as a female when pictured with a cub.

Age
Their initially pink noses get blacker with age. Diamond Girl was about 8 or 9; Ru about 4 at the time (now 6 or 7). Look for scratches on the nose and tatty ears as a sign of age. The dewlap forms when older, though it was less noticeable at Ingwe where the leopards do not have much competition and so do not hoist their prey into trees, thus the neck muscles are less developed.

Spatial Explicit Capture Recapture Model software was used to analyse data. 28 individual leopards were identified over the three-year period – 15 adults, 9 sub adults and 4 cubs – with four resident in the reserve. 11 cubs were born on site.

Diamond Girl - dominant female, with territory in the central area
Pippa - to the west
Ru - a young male, based in the south
Big D - male with a large territory overlapping all three of the above

Six cameras displayed a lot of activity, including shots of otherwise unknown leopards. Tara thought this particular area could be a dispersal route for leopards passing through and the hypothesis was supported by groups of holes in the fence at NW and SE extremities.

Golden leopards
A sandy coloured leopard with brown spots appeared on three cameras over two nights. Another similar variant, a six-month-old born to normal-coloured Pippa, has also been seen. That’s two with a particularly rare colour variation, possibly caused by a recessive gene. There are only five records of similar creatures between 1900 and 1950 – all in India. The next was in 2012 in Madekwe. In total there have been 12 in the world; 7 in South Africa. Five of these (71% are in the Lydenburg area and 29% in Thaba Tholo. This suggests inbreeding.

Black panthers
These are caused by an excess, rather than insufficiency, of pigment. They appear in greater numbers and are to be found notably in Tanzania and Malaysia.

‘Empathy and Education’. Combined with active research, KLR’s approach has paid off. Pippa was one of the leopards licensed to be shot, but is still alive. Hunting licences have now been banned for the year (despite their value as an income generator) and Mpumalanga Parks and Tourism Authorities wish to make use of Ingwe’s data.

Is the threat of poaching or even trophy hunting, exacerbated by the publication of research information? Yes, though on the other hand, conservation requires the cooperation of local people who won’t know if not informed. It is a balance; there is no easy answer.

Do leopards take livestock as easy prey or just when game is inadequate? Generally an individual sticks to a preferred species if the option is available. They seldom get a taste for sheep – indeed they are on camera as turning up their noses at sheep carcases. Problem animals are few and at Ingwe they all appear well fed.

Why the colour variation at Ingwe? White impala and black serval are also in the area inhabited by the golden leopards. The latter may have increased through isolation caused by key leopards being taken out.

Is the colour variation associated with health problems? Not known, but the black colouring of Malaysian leopards has equipped them well for the jungle.

Are the smaller leopards of the Cape a sub species? Not at present, though some scientists are pushing for this classification.

Do we know anything about the historical density trends; has there been a bottleneck? Not known.

There has been little dialogue between the various leopard projects being conducted, though that is starting to change.

The ratio of sexes is roughly even.

What is the level of human population at Ingwe? Low density; sparse farming at the borders.

The surrounding game fence is the normal type, but now has 1,500 holes, of which 900 are leopard sized. It is now thought best to keep the holes, as fences do not keep leopards out. One has even been through an electric fence!

25 kg of prey lasts for about a week, as the leopard changes from full to empty. Females hunt more frequently when they have cubs. If relying on guinea fowl, say, hunting may be required twice a day. But leopards are opportunists and if they gorge on kudu, will take a week and a half and more, to digest.

“Listen, don’t talk!” – Tara reiterated her approach. Locals will tolerate a degree of loss, but only up to a point. Work with them to meet half way, she urged. At Ingwe many children have seen no wildlife locally and are now looking with fresh eyes.