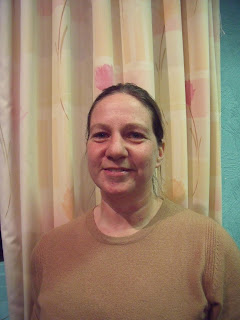 Dr Sarah Perkins is a wildlife biologist at Cardiff University, having started her career as a conservation officer for the UK Wildlife Trust. In an entire year of working as an Otter Conservation Officer, Sarah only ever saw one otter – a road-killed one – and became interested in quantifying the number of animals killed on the roads each year. She worked abroad for several years, working on wildlife diseases, before returning to the UK and taking a position at Cardiff. There her interest in the number of animals killed, which species are the most vulnerable, and whether there were hotspots of roadkill that could be mitigated against, led her to establish Project Splatter in 2013, as a collaborative citizen science project – the subject of her talk to the Berkshire Mammal Group.


Sarah opened by acknowledging that road kill is a common sight and asking generally how we engage with wildlife, and what the impact of roads might be on animal mortality. She turned to the journal, Science, which in December had published a paper on roadlessness. On screen was a map plotting the incidence of roads in red, lined with 1 km buffers into the surrounding habitat, and the road-free areas in blue, in which roads would have no effect on wildlife. 80% of the globe is still roadless, but much of this area is composed of the Arctic regions, the Siberian tundra and deserts in north Africa and Australia and other inhospitable environments. And the rest is divided into 600,000 fragmented habitats, half of which are less than 1 km in extent and only 7% are of the largest size category). Only 9.3% are protected areas. So the clear conclusion was that roads have the potential for a major impact on wildlife and its habitats.


The scale of road deaths


What might be the scale of wildlife road deaths, she asked, pointing to illustrative graphics: 100s, 10,000s, or 1,000,000s. Answering her own question – after an uneasy pause – Sarah said we simply don’t know, but can look at studies in other countries that have measured the effects direct vehicle collisions. They propose some dramatically varying estimates:

In the UK a PTES survey was launched in 2001, which has since measured mammals on roads for a period each summer. Usefully it has reflected the decline of the hedgehog, and also picked up a fall in rabbit numbers. But this survey is just in the summer, and just of mammals. Were there any other figures? Well, yes, Deer Collisions (www.deercollisions.co.uk) estimates 42,000 to 74,000 collision deaths a year, information drawn from police and insurance reports. The Mammal Society has produced estimates of 50,000 badger deaths a year, and 100,000 fox deaths. For birds a BTO Road Deaths Enquiry in 1960, at a time when there was rather less traffic than now, concluded a total of 2.9m avian road deaths. Sarah noted it took until 1965 for the figures to be published.

To draw together contemporary data on all species, Sarah introduced Project Splatter as a continuous, UK-wide survey, set up in January 2013. She explained that it started out as a final year project, undertaken with some reluctance at first by Sam Stafford, an undergraduate reading Zoology at Cardiff. He devised a social media to capture direct reporting by members of the public, and such was its early success that he become highly motivated and earned the soubriquet, “Splatter Sam”. This early success was cemented by the involvement of the press, in particular the publication of a two-page, full colour spread in the Independent, prompting
wider media attention. It was, in Sarah’s words, “a fantastic start”.

The social media platform is designed to make the task of reporting simple and accessible. Reports can be sent in by iPhone app, Android app, Facebook, Twitter and by email or through the web. The scheme accepts both occasional and regular reporting – there need be no on-going commitment, though many of the 2,000 participants are regular contributors – and on Monday the project offers feedback, drawing attention to some of the quirkier reports.

The project’s purpose is to quantify and map British roadkill, determining which species are the most observed, and identifying spatial and temporal hotspots: the ‘where’ and ‘when’. It aims to raise awareness of the roadkill problem, and encourage mitigation (such as green bridges). Ultimately it seeks to reduce the negative impact of roads on wildlife.

To date, Project Splatter has accumulated over 35,000 records. These include 33 mammal species, from shrews to wild boar, and these represent 62% of the records.. Representing another 34% are the 74 bird species, from blackcap to buzzard. There are very few reptiles and amphibians. The five species most recorded as roadkill are:
15% Badgers
14% Rabbits
11% Foxes
7% Hedgehogs
7% Pigeons

And as for distribution, the records come from throughout the country, probably reflecting abundance. However, any analysis needs to account for reporter bias; there are few reports from the Highlands of Scotland, whereas Sussex generates more records than any other county. (There, a paramedic has been involved from the start and is a prolific provider of records.) Double counting is not considered a problem at this stage; with 2,000 reporters and 8,000 reports a year, there are simply not enough reports for duplicated to occur to any degree.

Berkshire
A map of the county indicated ribbons of reports along the M4, A34 and Vale of the White Horse, with a cluster around Newbury and a broader blanket of sightings to the west of the Thames around Abingdon. 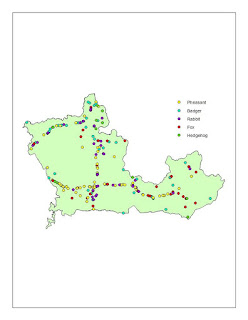 In Berkshire pheasants are the most prevalent casualties, at 39% of reports compared with 23% nationally. (At 25% for badgers the local and national tallies are in line, though other species tend to be under represented.) But what do the figures suggest about pheasants’ behaviour. A graph of the monthly figures produce a peak in September and October, when naïve young birds are released, and in March, when feral pheasants escape into the countryside. 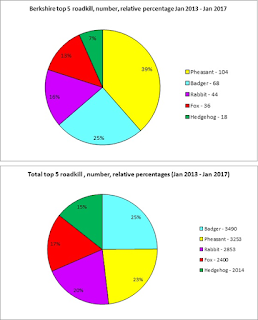 Using SaTScan models, the Project has identified nine county clusters for mammals, some comprising single species and some of multiple species. There are obvious clusters, such as for badgers in Somerset, where they are presumed to relate to animal abundance, while others are as yet unexplained, such as the concentration of rats in northern England.

For birds there are seven such clusters. An analysis of these suggests some behaviours tends to endanger certain species. Blackbirds, for instance, have a tendency to last-minute flight from possible predators, and a low, undulating flight pattern, and so are innately vulnerable to vehicles. In discussion afterwards it was noted that, conversely, crows have an enhanced ability to judge the paths of approaching danger, and avoid on-coming vehicles.
Sarah asked which roads were the most deadly: Motorways, A roads or B roads. The answer was A roads. Is this the effect of lighting, she wondered, increasing visibility and causing animal avoidance? Hedgehogs were cited as an example of a vulnerable species, falling from 30m in 1950, when there were far fewer motorways and major roads, to 1.5m in 1995. 20-40,00 are killed on roads per annum – far too high a figure.

Peak reporting is in September, July and April, with winter the lowest. Perhaps unsurprisingly the peaks coincide with seasonal breeding and dispersal activity, while many creatures hibernate during the winter. Yet this varies from year to year, according, in part to temperature and the weather, which affects activity and therefore vulnerability to vehicles.

It is accepted that scavengers clear carcases and therefore evidence, so establishing the rate of disappearance would give a useful correction factor when analysing the figures. One early study was by Fred Slater, who set out chicken carcasses and measured the tracks of scavengers left in a surrounding sand pit. He established the rate of disappearance was rapid, suggesting that reporting was underestimated 12-16 fold.

To extend this research for the project’s own purposes the University of Cardiff undertook to study the rate of disappearance. Chicken heads were distributed by student Harry Williams at twelve locations around the city, with camera traps set up: some in parks, some in streets. As an amusing aside, Sarah recounted how some of the cameras disappeared, then reappeared, many with footage of puzzled residents investigating the device, and then, having realised what it was, putting it back! The survey was carried out both day and night, and recorded 120 sessions.

Six principal species of scavenger were identified: corvids, foxes, dogs, cats and gulls. How long it took for the carcasses to be taken varied according to the time of day: in the daytime it was very quick, but at night it tended to lie untouched until at dawn, when scavenging was dominated by foxes and domestic cats. Quantifying that, it was established there was a 75.8% chance of removal within 12 hours. On average it took 2 hrs, 13 mins in the day; 8 hrs and 47 mins at night.
To illustrate which scavengers eat carcasses, Sarah showed a short video made up of day and night-time footage from the camera trips. During the day there were plenty of corvids (crows and magpies), cats and dogs; at night, there were rats, foxes, gulls, magpies and – surprisingly – wood mice (visible mainly by their large reflective eyes). Urban foxes were brazen, while rural foxes markedly more timid.

Project Splatter’s records are considered open source and available to share, and so feed into several other studies. Among these are the records of polecats, which are sent to the Vincent Wildlife Trust to help monitor the expansion of this species out from central Wales. Records have been used to help with mapping invasive species, eg Wallaby in Surrey; Wild Boar in Bristol. But perhaps the most systematic is the 20-year-old otter project run by Liz Chadwick, also at Cardiff University.

Cardiff University Otter Project
In this project otter carcasses are taken to Cardiff for post mortem examination, where the livers and kidneys are checked for contaminants in habitat, parasites are identified, signs of fecundity noted. Rather sadly, Sarah noted the discovery of four nearly full-term foetuses that had died when their mother had been hit. The results of post mortems contribute to various study programmes, the decline of eels and the presence of Toxoplasma gondii, for instance. The otter is a sentinel for watercourse purity and so much can be gained by their examination.

Dead or Alive
A spin-off project, entitled ‘Dead or Alive’, was set up to quantify popular interaction with wildlife; do most people see wildlife alive, or just as roadkill? The project conducted a four-week survey, eliciting 1,400 responses! To take one of the top five roadkill species, the badger, it was possible to establish that 7% of respondents had never seen one, but 88% had seen one dead. As few as 5% had only ever seen live badgers.

Respondents were invited to leave comments too, and the responses indicated a high level of concern about the spread of invasive species.

Roadkill Sub-culture
Touching on an interaction of a more unusual nature, Sarah spent a few minutes describing some aspects of roadkill’s place in art, design, clothing and food. She pointed to the activity of ‘freegans’, those who eat roadkill, and the existence of roadkill chefs and ‘badger balti’. She illustrated some of the work of Adam Morrigan, the roadkill artist, and of Jez East/ton Design

Returning to Project Splatter, Sarah drew together the various threads of her talk, summarising the role of roadkill research as a contributor to:


She ended by urging the audience to get involved, and supporting imminent moves for new legislation being led by Wendy Morton MP: the Local Authority Roads (Wildlife Protection) Bill.